Who doesn’t want to seek out riches beyond their wildest imagination in a quest for immortality and unparalleled power? That’s exactly what Curse of the Dead Gods allows you to do in traditional action/RPG style with some roguelike flair – as long as you don’t mind some pesky curses along the way.

You are Caradog McCallister, a character thrust into a living nightmare plagued with curses, death, and an endless array of traps meant to torture and maim. Be prepared to die a lot, though persistent progression takes the sting out of your demise. As you fight to survive, you find a plethora of weapons and gear to unlock and rank up, including both primary and secondary weapons, as well as ranged and two-handed. You can also combo different weapon types as well, which makes wading into a dark dungeon filled with terrors a little easier to face head-on.

The true power of weaponry comes through in the hammers and pistols, but the shields and bows are a close second when gearing up for the next wave of battle. The pistols offer a solid range with an impressive amount of damage, which you can further improve with upgrades. The hammer is my favorite option; it just feels like a beast, even though it’s a little slower when delivering that final blow, the impact it has on foes far outweighs its lack of speed.

To unlock each weapon, you travel certain paths that indicate the reward waiting for you at the end, so you can plan your own progression to a degree. You also accrue green rings and blue skulls through each run, which are used to unlock new weapons and add new buffs. Leveling up preferred weapons is also pretty straightforward, both with approaching paths with upgrade options available as well as paying tribute to the gods through blood, purity, or gold. This mechanical structure was something that I loved because it made it easier to strategize how I wanted to approach upgrades and what I was willing to give up for better stats.

Tailoring the combat experience to your own liking is easy. For me, I love to combo my attacks, bringing with me a weapon that has range capabilities (like a bow or a pistol), or a heavy-hitter like the aforementioned hammer or a spear. Chain attacks create a more powerful way to approach danger, but it’s important to play to your strengths. If you like taking a more strategic approach, ranged attacks and shields are going to be your best bet. Paired with the right buffs, navigating dangerous curses can be just a little bit easier to do for those that play their cards right. 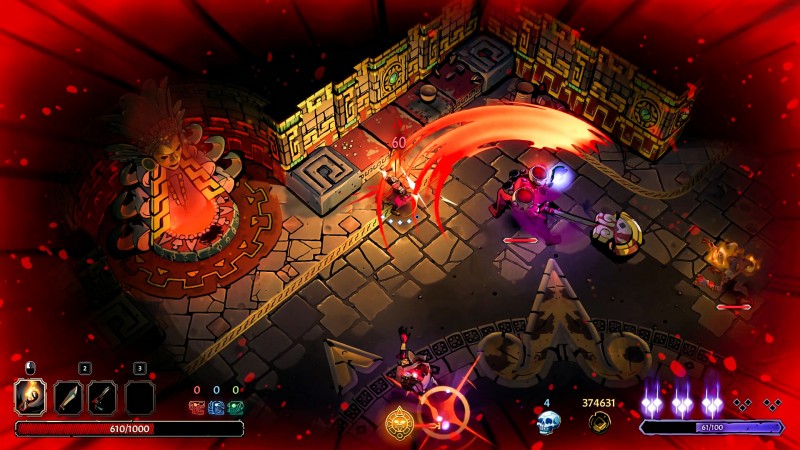 With each run, you encounter different curses that hinder your capabilities in different ways. A meter beside your health bar tracks how much corruption you gain. If that bar reached 100, congrats! You’re now cursed. Every time you walk into a room, your corruption meter rises. It’s an unavoidable part of your adventure, but that doesn’t mean you can’t work around it.

The curse system makes each playthrough exciting because it alters the variables. Curses can change how you take damage, how your own damage is received. It changes the nature of the temple itself, and it impacts your status. It’s a central part of the gameplay mechanics, making navigation of curses and corruption an interesting aspect of the journey itself.

Unless removed, curses will remain active the entire run, but the bright side is that you can remove them. At the end of each area map, there is a boss. Take down the boss and the curse is removed. Of course, these are gods we’re talking about, so there is always a catch: You can only remove one curse, so strategy once more plays a key role.

You can’t control what type of curse you get (they’re randomized), which adds some spice to the repetition of your runs. The only exception to this is the final curse, which always activates when your corruption meter hits the last stage. Since I tend to just go ham when I enter high-danger areas, I had to really brace, because this curse ensures survival is as difficult as possible. Death is inevitable, but this ramped-up danger serves as another way to break up the monotony.

Roguelites feature repetition by design, but the loop in Curse of the Dead Gods gets old pretty quickly. The traps become predictable, the enemies all start to bleed together, and it eventually starts to lose that “shiny new adventure” appeal. Where roguelites like Hades put an inventive spin on the format and take it to new heights, this one takes a more familiar approach. That’s not a bad thing, but it requires a high tolerance for repetition and dedicated love for established conventions.

One drawback is the lack of voice acting beyond general grunts, which presents a unique juxtaposition when diving into this world. At first, the quiet makes it easy to feel the desolation of this character; I felt his solitude and his despair. The longer I played, however, the more that silence felt disconnected rather than nuanced. Even a few voice lines peppered in would have helped build this character and world immensely.

Overall, Curse of the Dead Gods is a solid roguelite, though it doesn’t attempt anything revolutionary or ambitious. Its familiar approach to genre-specific structure makes it easy to dive right into without fearing a loss of the challenge. The different strategic approaches available with the upgrades system also makes progression feel rewarding. The art, the variety of curses, and the overall formula that Curse of the Dead Gods follows make it a tale worth exploring, even if the moral of the story is that greed equals painful and agonizing death.

Outriders Review – Chaos That Surprises In The Best Way

Lost Words: Beyond The Page Review – A Touching Tale Full Of Emotional Highs And Lows